Now I normally don’t do series reviews, but I read all three of the Sweet Evil books by Wendy Higgins this week, and so I thought I would just do a review of the entire trilogy. For those of you who haven’t read the books, the trilogy consists of Sweet Evil, Sweet Peril, and Sweet Reckoning. However, I’ll be quite surprised if you haven’t heard of these before. They’re quite popular, with good reason. To start off I’ll say that overall I did enjoy the trilogy. I’ll have to say I’ll give the trilogy as whole a 3 out of 5. I enjoyed them, but I honestly don’t think I’ll ever reread them, and am glad that I got them from my library. 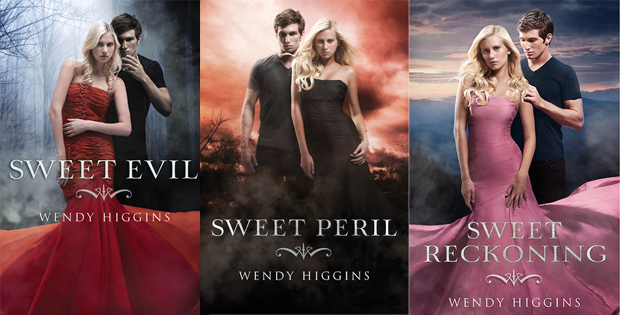 This trilogy follows Anna Whitt, daughter of Belial, who is a demon and the Duke of Substance Abuse. Her mother was a guardian angel who died during her birth. She was adopted by a woman named Patti and raised in a small town. She always knew she was different, and everything started to make sense when she found out she’s a Neph. One night she’s out with her best friend and human, Jay. They are going to see a band play, and from that night everything changes.

She meets Kaiden Rowe, the drummer and also the son of Parzuph, the Duke of Lust. Kaiden is the boy your parents tell you to stay away from. It’s kind of impossible for Kaiden and Anna though, because right from the first eye contact, they are drawn to each other. As I said right from the first meeting everything changes.

What did I like about these books? Well I loved the characters(for the most part). What’s really surprising is that, I think I may have loved the side characters more than the main characters. (SHOCKING) Don’t get me wrong, I did like Anna and Kaiden, but they also did get on my nerves a lot! I absolutely loved Patti, Belial, Jay, Marna, Ginger, Blake, and Kopano. I thought they were so entertaining and amazing characters. And when I got annoyed with Anna, these characters kept me invested.

idn’t I enjoy about these books? Well it’s quite simple, Anna and Kaiden. Now don’t get me wrong, in NO WAY did I hate them. In fact, I was intrigued in there relationship and wanted them to get a happy ending, but boy did they piss me off. The things Anna did just seemed so stalker-ish to me, and really annoyed me. At times, I wanted to put the book down because of it. And Kaiden being so distant, but angry when he believes she’s with someone else. UGH. It’s strange because usually I’m all for these we-can-never-be-together, it’s-too-dangerous, relationships, but this just pissed me off. However, by the third book, it was tolerable, and I found myself enjoying them a lot more.

I figured it would be fun to tell you guys my favorite scene from each book, so here we go.

One of my favorite moments in Sweet Evil, absolutely, hands down 100 percent had to be when she finally meets her father in prison. I thought it was going to be this awkward moment, and he was going to be a complete and total ass to her, but boy was I wrong. I absolutely ADORED this scene, and any scene with her dad in it. He’s so awesome!

My favorite moment in Sweet Peril was the finale when Anna, Kaiden, Blake, Kopano, and Zania had to hide under water when the Dukes arrive at the island. I was so invested in that, and was surprised to see what played out.

My favorite moment in Sweet Reckoning…omg this was is hard. Th

is is probably my favorite book of the three. I think I have to go with the Thanksgiving scene. When everyone arrived at Patti’s house and they all spent time cooking, eating and playing games like a real family. I had the biggest smile on my face the entire time I was reading that scene! It was amazing.